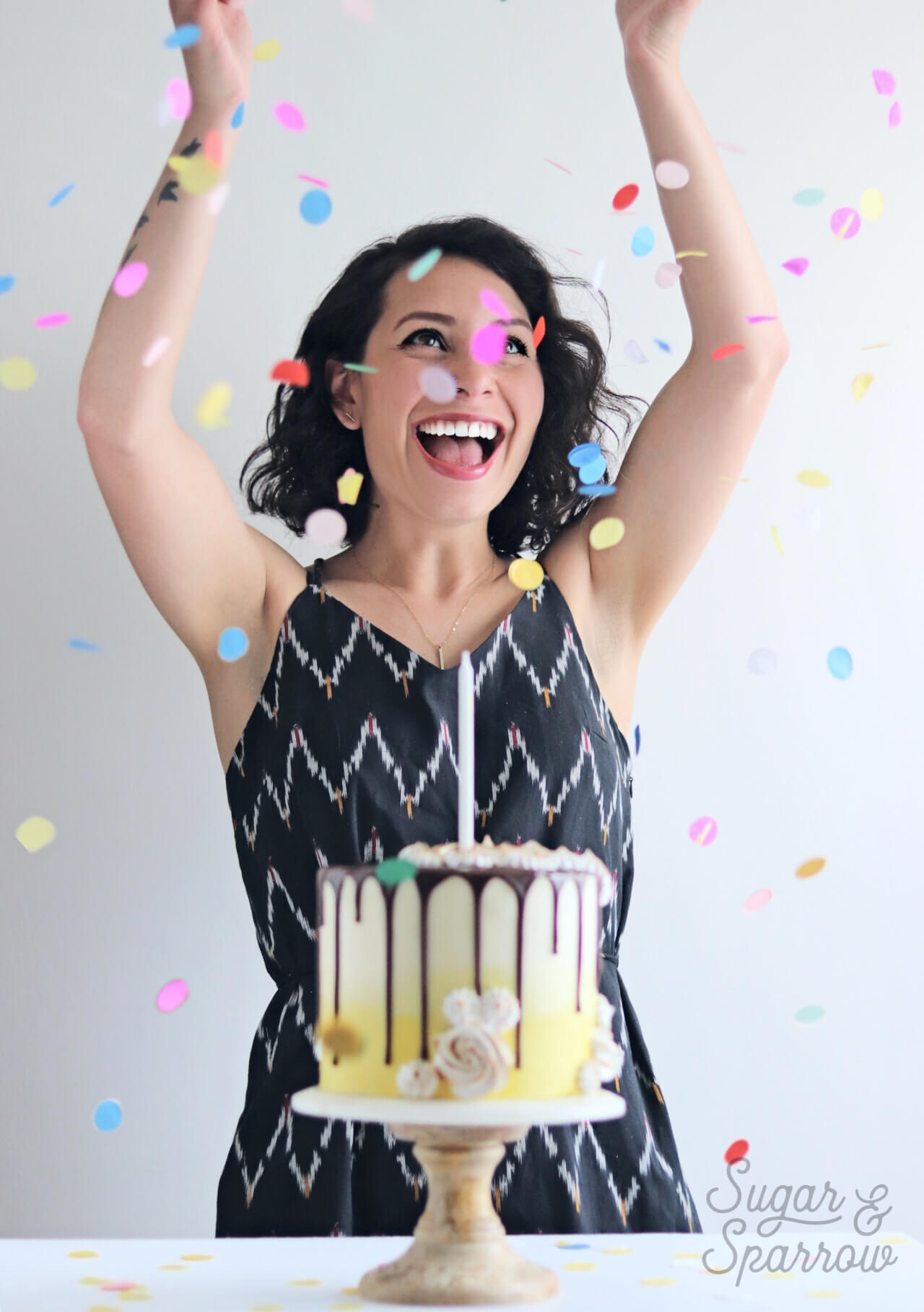 Huzzah! It’s my birthday! Well, technically it was last week but I’m still celebrating. I’m a whopping 32 years old now, and although I usually dread birthdays because of the whole getting older thing, this year I’m feeling pretty content. I’ve gotten to spend a lot of time with my very most favorite people, and I’m feeling so truly loved that I just can’t complain.

When you’re a caker it’s quite common to make your own birthday cakes, and this year was no exception. I thought about making something classic and reminiscent of my childhood (like yellow cake with chocolate frosting, the all-time favorite of my youth) but then I thought, why not use my birthday as an excuse to pair some flavors I love in a way that I’ve never done before? Even if it didn’t turn out right, it could be a good laugh. But spoiler alert: it turned out real good! 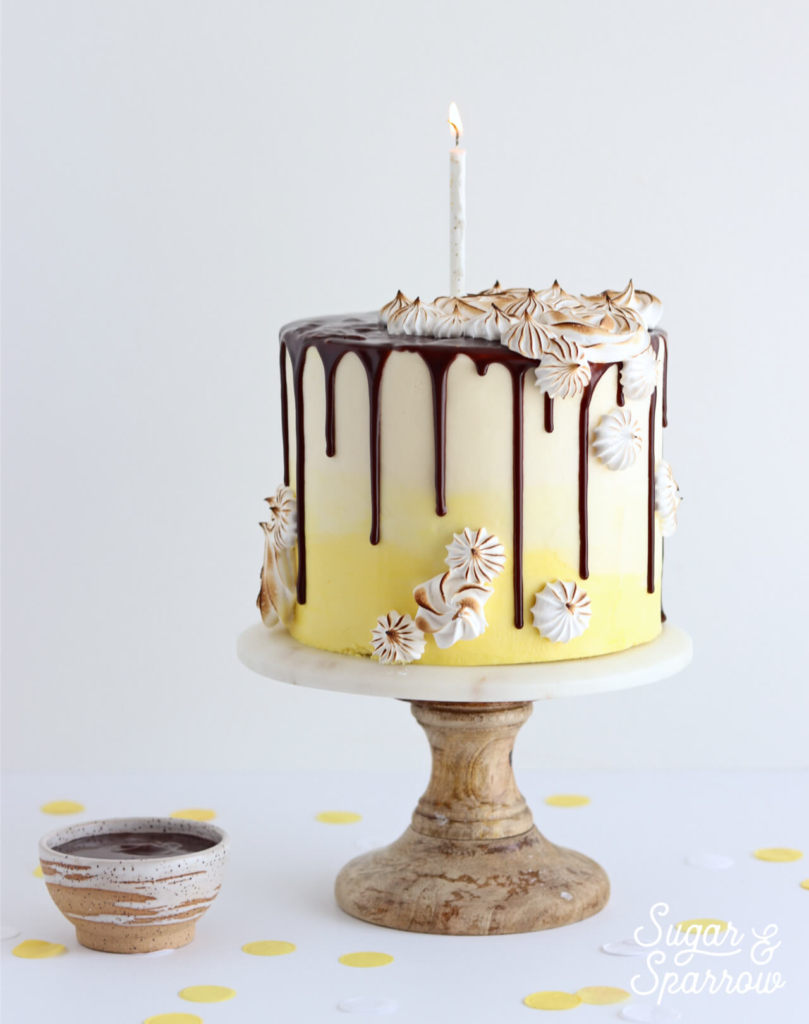 One of my all-time favorite desserts is Baked Alaska from a restaurant called Papa Haydn. The dessert is about a foot tall, and it involves layers of dulce de leche and banana ice creams, chocolate ganache, and vanilla sponge cake, all topped with toasted Italian meringue. It’s different than a traditional Baked Alaska because of the ice cream flavors – the classic Baked Alaska involves Neapolitan ice cream instead of the dulce de leche and banana combo that Papa Haydn has created. I love what they’ve done with the flavor pairings though, and I get the same thing almost every time I go.

I thought about trying to replicate the Baked Alaska in it’s true form, but since I’ve never actually made ice cream and don’t really have the right equipment yet, I decided to pull some inspiration from the flavors of my favorite Baked Alaska and then add some new ones. What I ended up with was a spiced banana cake with vanilla buttercream, drizzled with Nutella ganache and topped with toasted meringue flourishes. It ended up being real pretty and so tasty! Pair it with a little ice cream if you’re feeling fancy and you’ll have yourself a time. 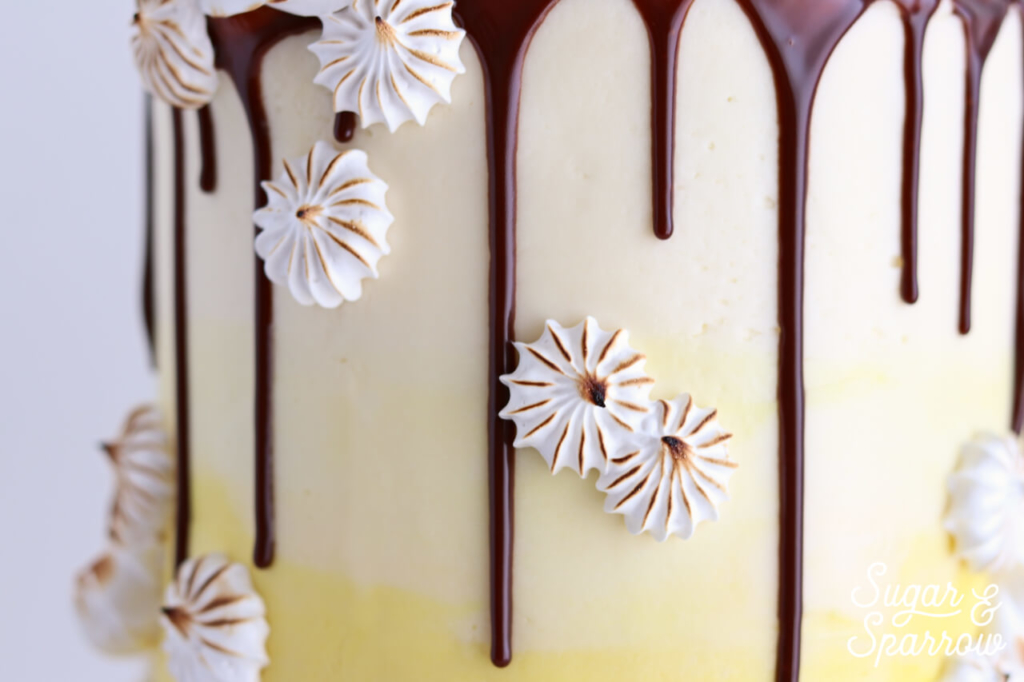 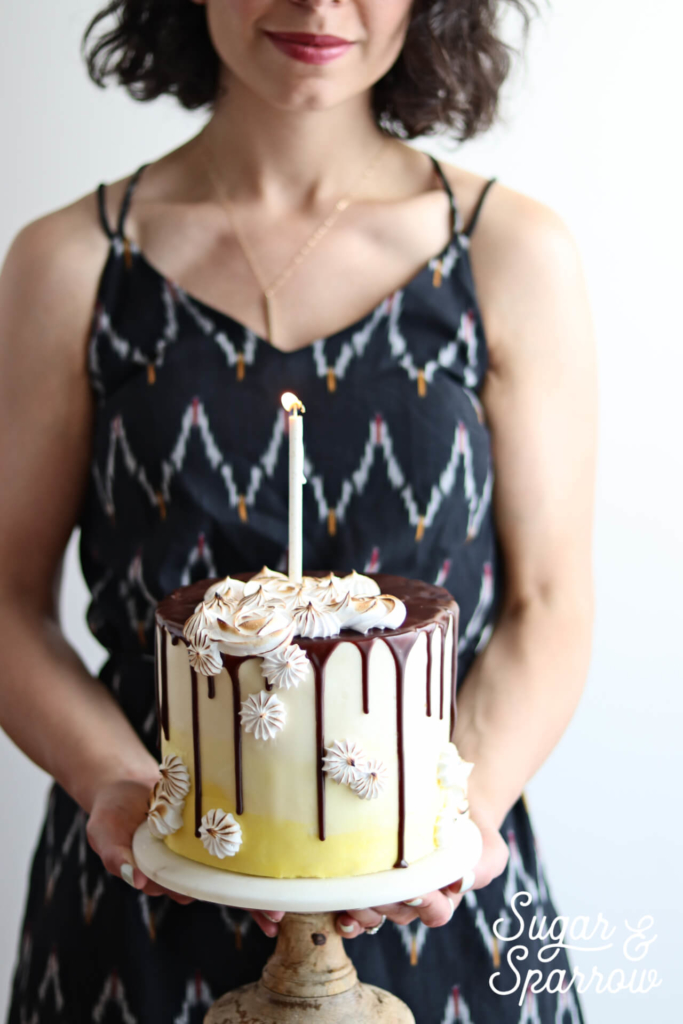 To get the perfect banana flavor, you’ve got to start with bananas that are nice and spotted. That means you either have to plan ahead and buy your bananas about a week before making this cake, or store some spotted bananas in the freezer until the time is right. The more over-ripe (spotty) the bananas are, the more banana flavor will come through in the cake. 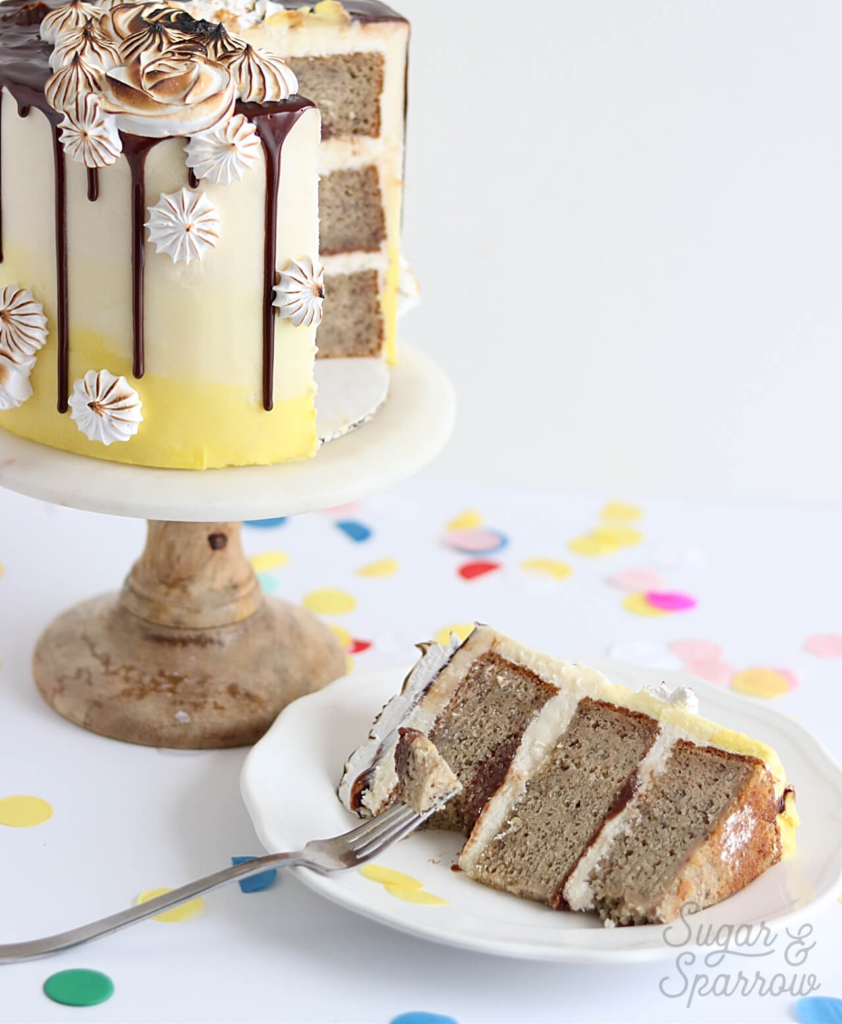 To get the full effect of this toasted masterpiece, you’ll need a culinary torch to toast the meringue. Trust me, I’ve tried with everything from matches to one of those lighter gun thingys and nothing will give you the look and taste of toasted goodness quite like a good culinary torch. You can use some piping tips to pipe unique designs with the meringue (I’ve used Wilton 4B for the open stars and 1M for the rosettes) or keep with the traditional look of swirling the meringue with an offset spatula before toasting to perfection. Whatever you decide for the final look, I can promise these flavors are sure to please. 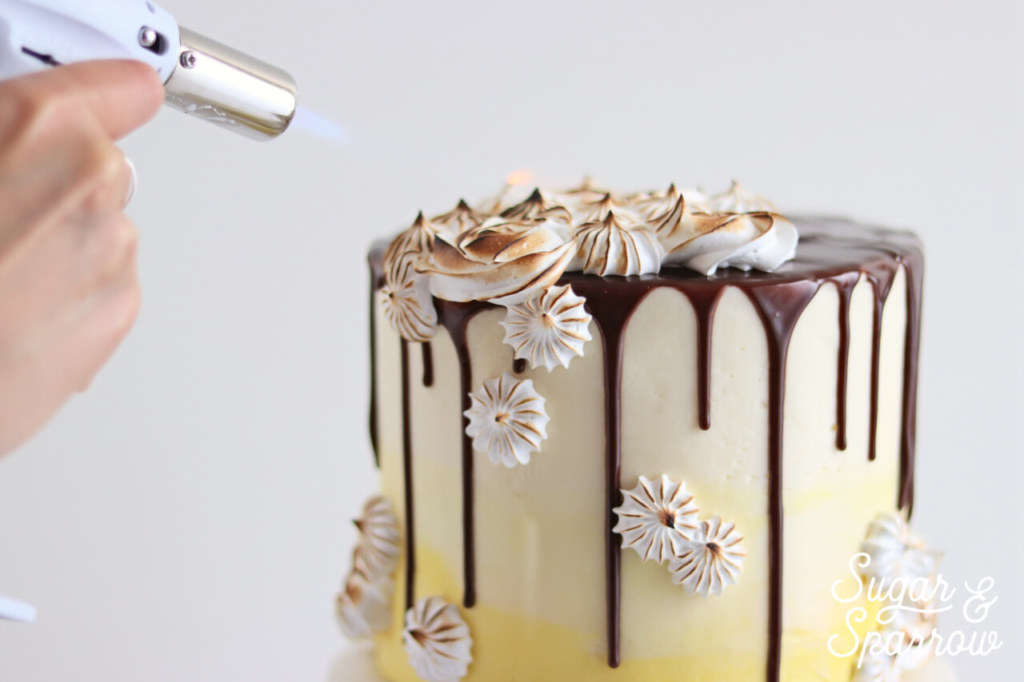 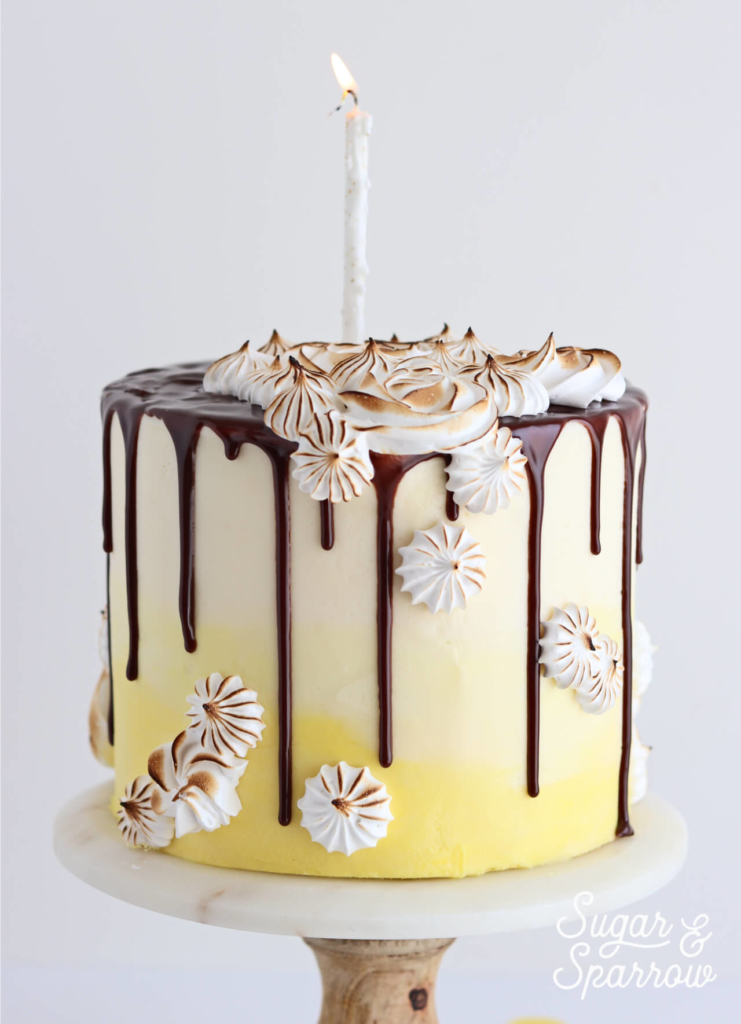 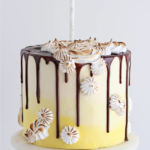 The cake layers can be baked ahead of time and stored (wrapped in plastic wrap) for up to two days at room temperature, or up to three months in the freezer.

The Nutella Ganache can be made ahead and stored in an airtight container in the refrigerator for up to two weeks. When you're ready to use it, bring it back to drip consistency by microwaving in ten second spurts.

The Vanilla Buttercream can be made ahead and stored in an airtight container in the refrigerator for up to two weeks. When you're ready to use it, bring it back to room temperature and re-whip with your stand mixer.

The Meringue topping must be made and torched on the spot.

What do you other cakers do on your birthdays? Do you make your own cake or let someone else make one for you for a change? Honestly, this year was a both/and/and situation, meaning I made my own cake, and let someone make me a cake, and went to Papa Haydn and got that Baked Alaska. Because hey, I do what I want on my birthday.