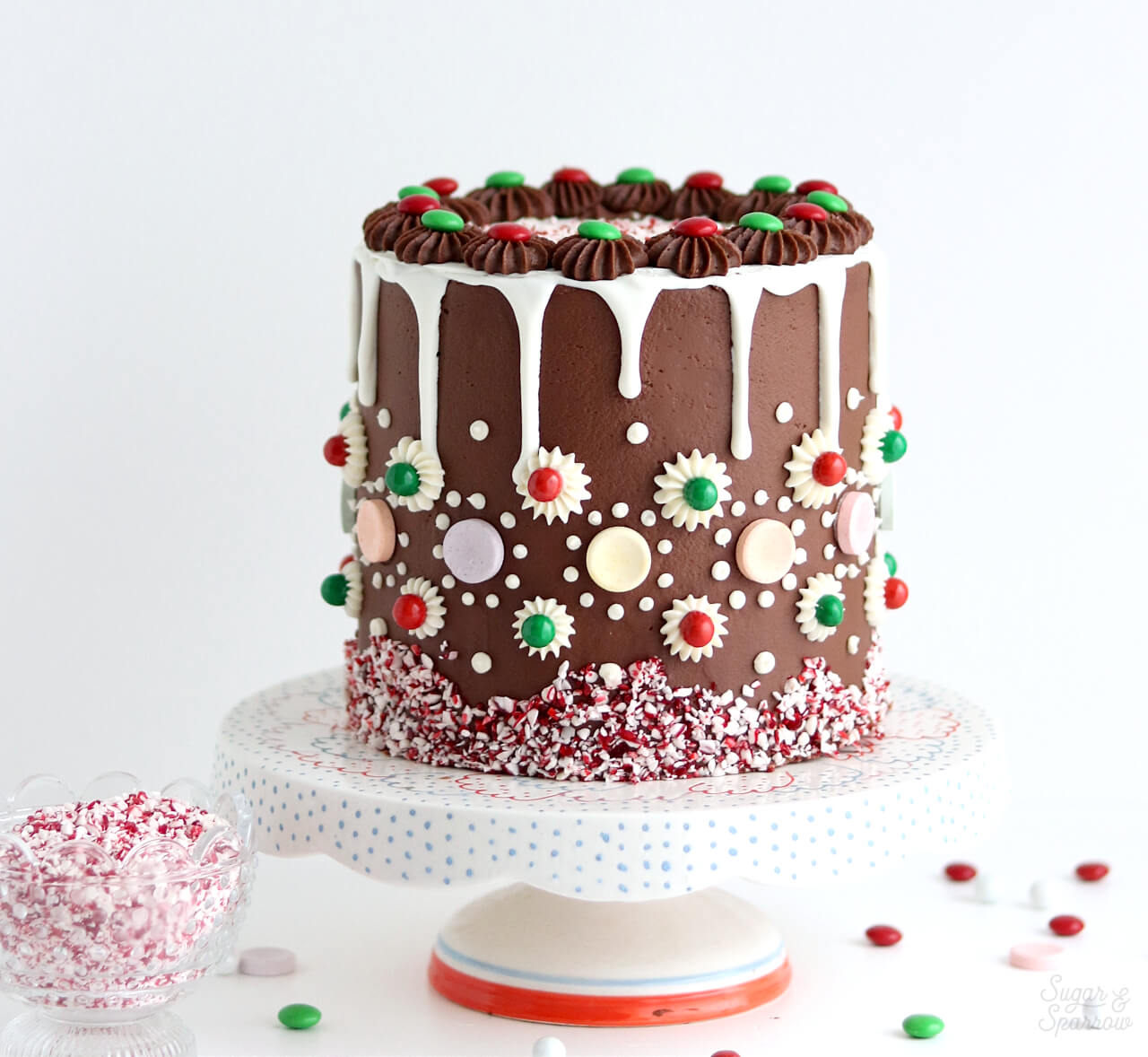 There’s something about using buttercream to glue candy onto gingerbread that evokes whimsy and creativity, no matter what age you are. It’s one of my favorite Holiday traditions, and although it’s a whole lot of fun to decorate a gingerbread house, I find that they end up being more for displaying than eating. Maybe it’s because in order to get a solid structure, you’ve got to make sure the gingerbread is rock hard, or maybe it’s because you’re just so proud of your creation that it’s too pretty to eat. Either way, I wanted to pair the fun of creative candy placement with a gingerbread cake that actually tastes good enough to eat! Behold:

So much fun, right? I actually made a similar gingerbread cake last year, but decided to revamp it this year to focus more on tweaking the flavors. Last year, my cake was a little too dense and molasses-y, and did not pair super well with the rich chocolate ganache it was covered in. So this year I made a few changes to amplify flavor and create a gingerbread cake that’s moist and delicious, tastefully spiced, and so easy to whip up!

For decorating this cake, all you need is your favorite Christmas candy, a half batch of vanilla buttercream, some pretty piping tips, and imagination that’s fueled by Holiday spirit! I love Wilton tip 4B (the open star tip) for whimsical finish work like this, and I’ve also used Wilton tip 3 to pipe some small dots. The white chocolate ganache drip is totally optional, but it reminds me of the royal icing that’s used to glue gingerbread structures together, so I added one for looks. It’s got such a light flavor that it doesn’t clash with all the rest of the flavors going on. I’ve got the recipe here just in case you want to add one yourself!

Here’s a quick video to demonstrate the decorating techniques I’ve used to create this gingerbread cake:

Since the design of this cake is meant to be a bit childlike and fun, decorating it would be such a fun project to do with little ones! Just an idea for your long Holiday weekend as an alternative to the traditional gingerbread house. Whatever you decide to do design-wise, I think these flavors make the perfect Christmassy dessert to celebrate the season! 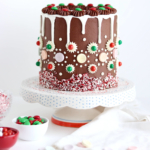 *Homemade Buttermilk Recipe: if you can’t find full fat buttermilk at your local store, you can easily make it yourself by adding 4 tsp white vinegar to a jar and pouring 1 cup of whole milk over the top. Give it a few whisks and let it sit for 15 minutes before using or placing in an airtight container in the refrigerator until ready to use.

Make Ahead Tips: The Gingerbread Cake can be made ahead and stored at room temperature, wrapped in plastic, for up to one day. Alternatively, you can tightly wrap the cake layers and place them in the freezer for up to two months before thawing and using.

The buttercream recipes can be made ahead and stored in airtight containers at room temperature for up to one day. Alternatively, you can store them in the refrigerator for up to two weeks before bringing back to room temperature and re-whipping with your stand mixer to bring them back to the correct consistency.

What are you planning on making for your Holiday dessert table this year? I really hope you get a chance to make this cake! If you love the flavor of spicy gingerbread + the soft, fluffy texture of cake, this recipe is a real Christmas treat. Let me know if you make it by tagging me on Instagram or letting me know in the comments! Happy Holidays!