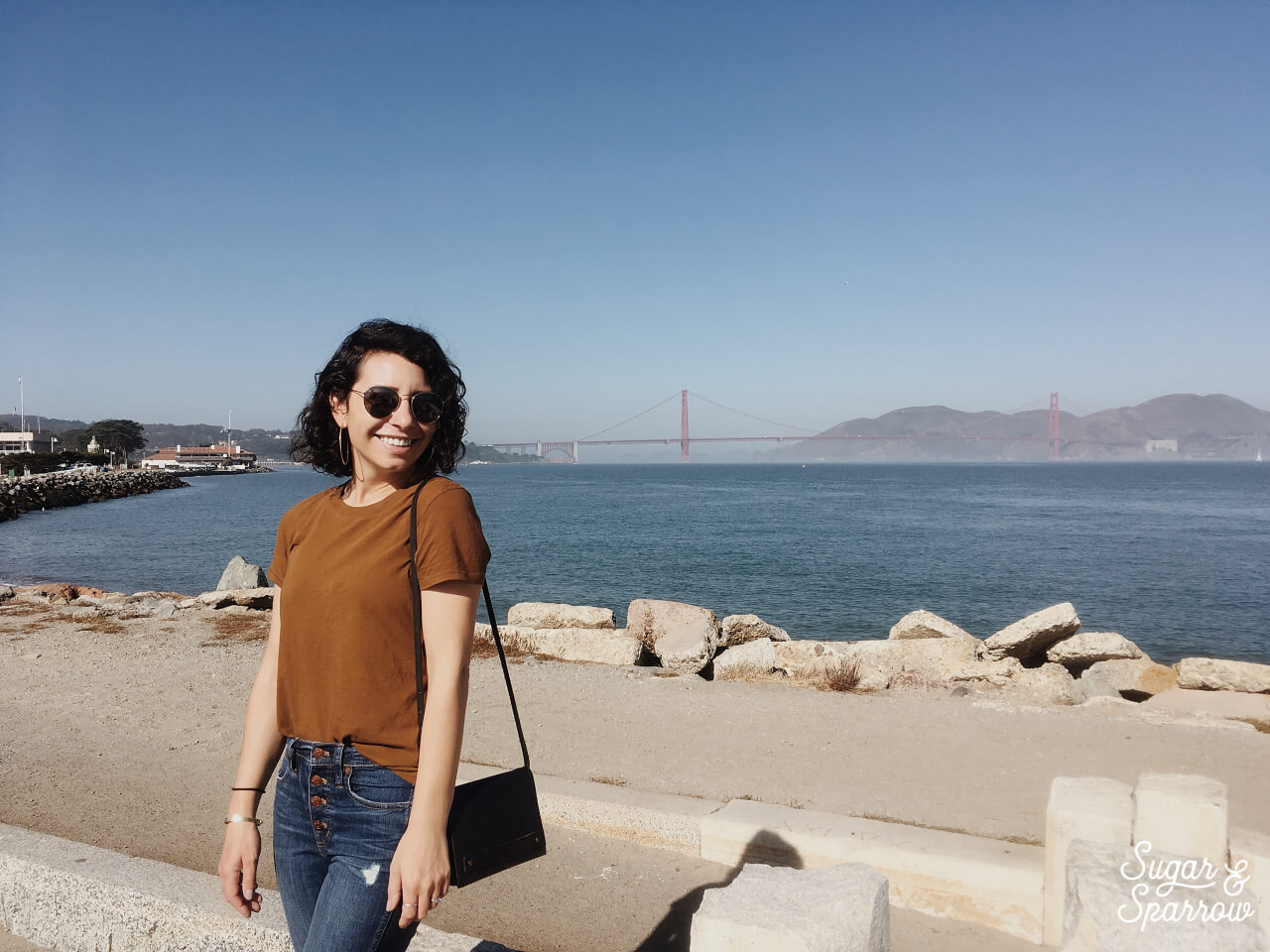 As soon as we drove over the Golden Gate Bridge for the first time, I felt like Kevin McAllister in Home Alone 2 (you know, the scene where he’s awestruck taking the taxi over the Brooklyn Bridge) and just wanted to stick my head out of the window and marvel at the city ahead. Instead, I kept my head inside the car because the Lyft driver would have probably scolded me, but I was smitten nonetheless! The weather in San Francisco was beautiful and sunny the whole time, so everything looked very picturesque and we got to see and do a whole lot. The only limitation we had was the fact that we only had two full days to do it all.

With the time limitation, we broke our days up as efficiently as possible: day one would be all about exploring the northern part of the city (The Presidio, The Wharf, and surrounding areas), and the second day would be mainly about the Mission District. The first thing I noticed about actually being in the city versus planning out our activities on a map is that the city in real life is HUGE and has lots of hills. It’s not flat like the map, so we traded some of the walking for a few more sweaty Muni rides and Lyfts than I planned for. My feet were thankful though! 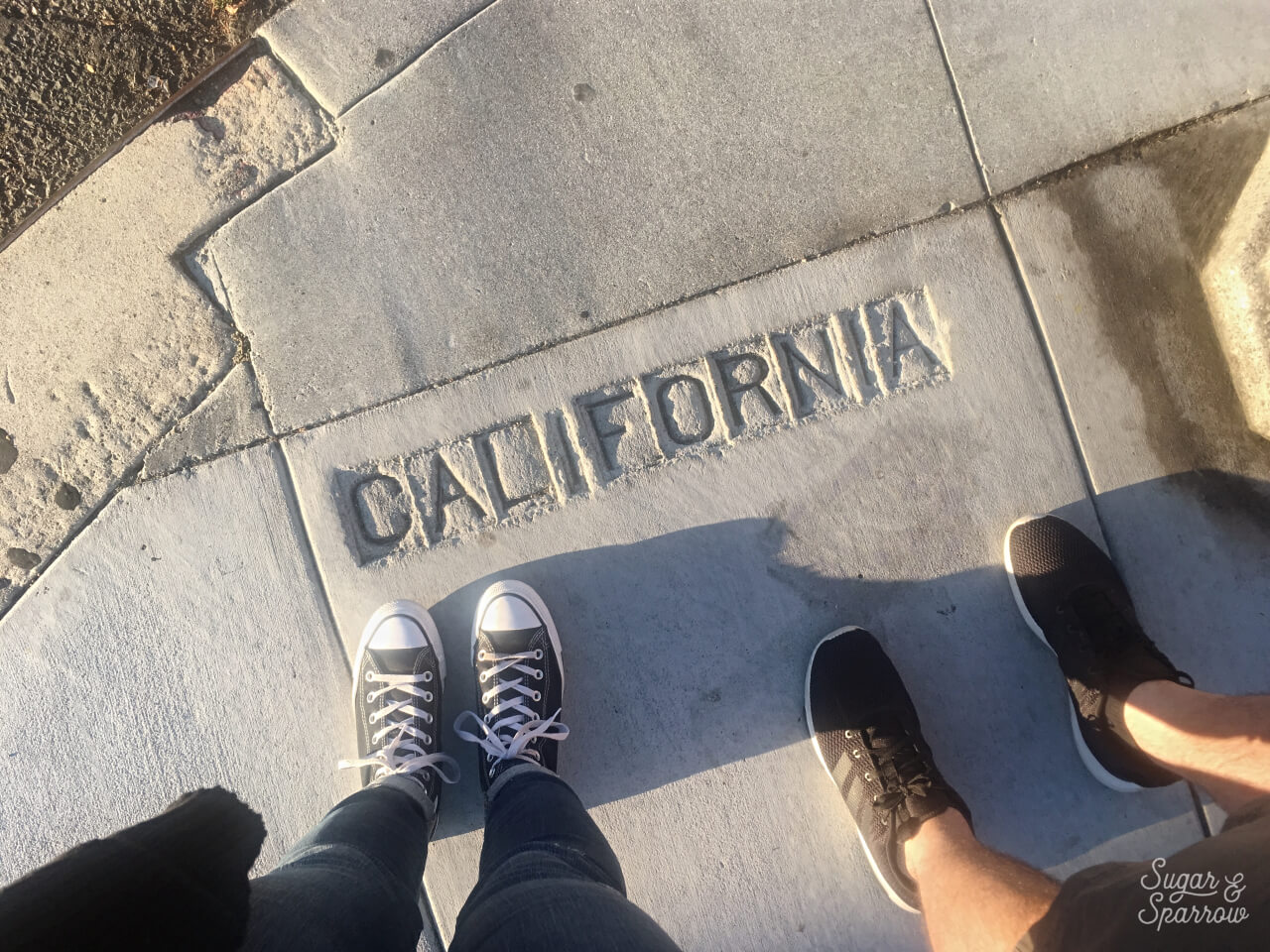 Side note: If you want to read about our road trip from Portland to San Francisco, read all about it on this post. And if you want more details about all the things we ate, I wrote some words on all of that here. In the meantime, here are a few things more we loved, plus a few things we want to do next time we’re in San Fran:

The Presidio And The Marina District

Josiah and I are big Disney fans and were so excited to discover that there was not only a Walt Disney Family Museum in the Presidio, but an entire special exhibit dedicated to Disney’s Nine Old Men (the nine core animators behind legendary Disney films like Alice In Wonderland, Peter Pan, Snow White and the Seven Dwarfs, etc). We nerded out big time over seeing original drawings from those films and got inspired by the processes of their art. 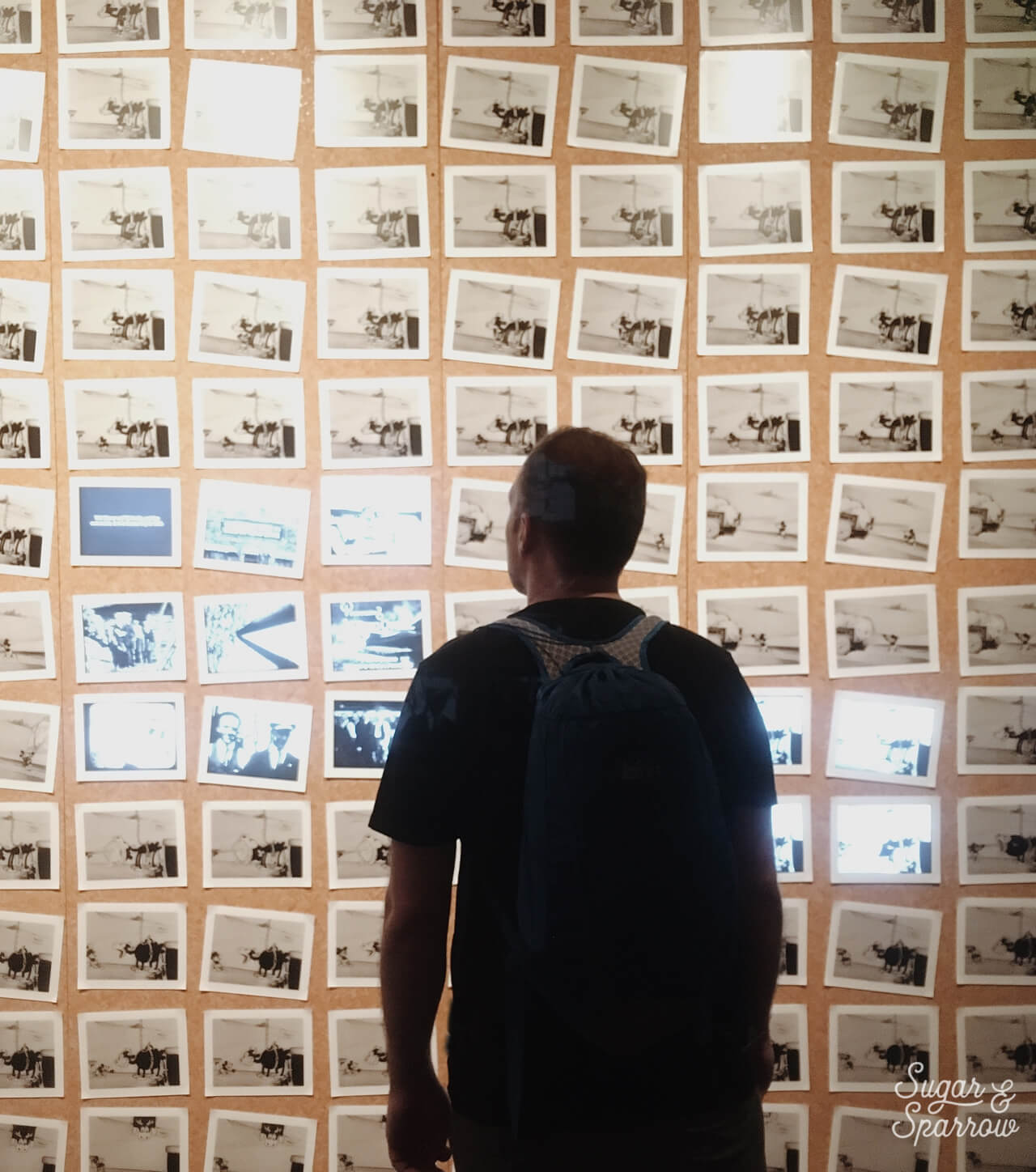 We also learned all about Walt Disney’s life and got to see tons of artifacts, including a giant 3D model of Disneyland’s concept art, created before it was built. 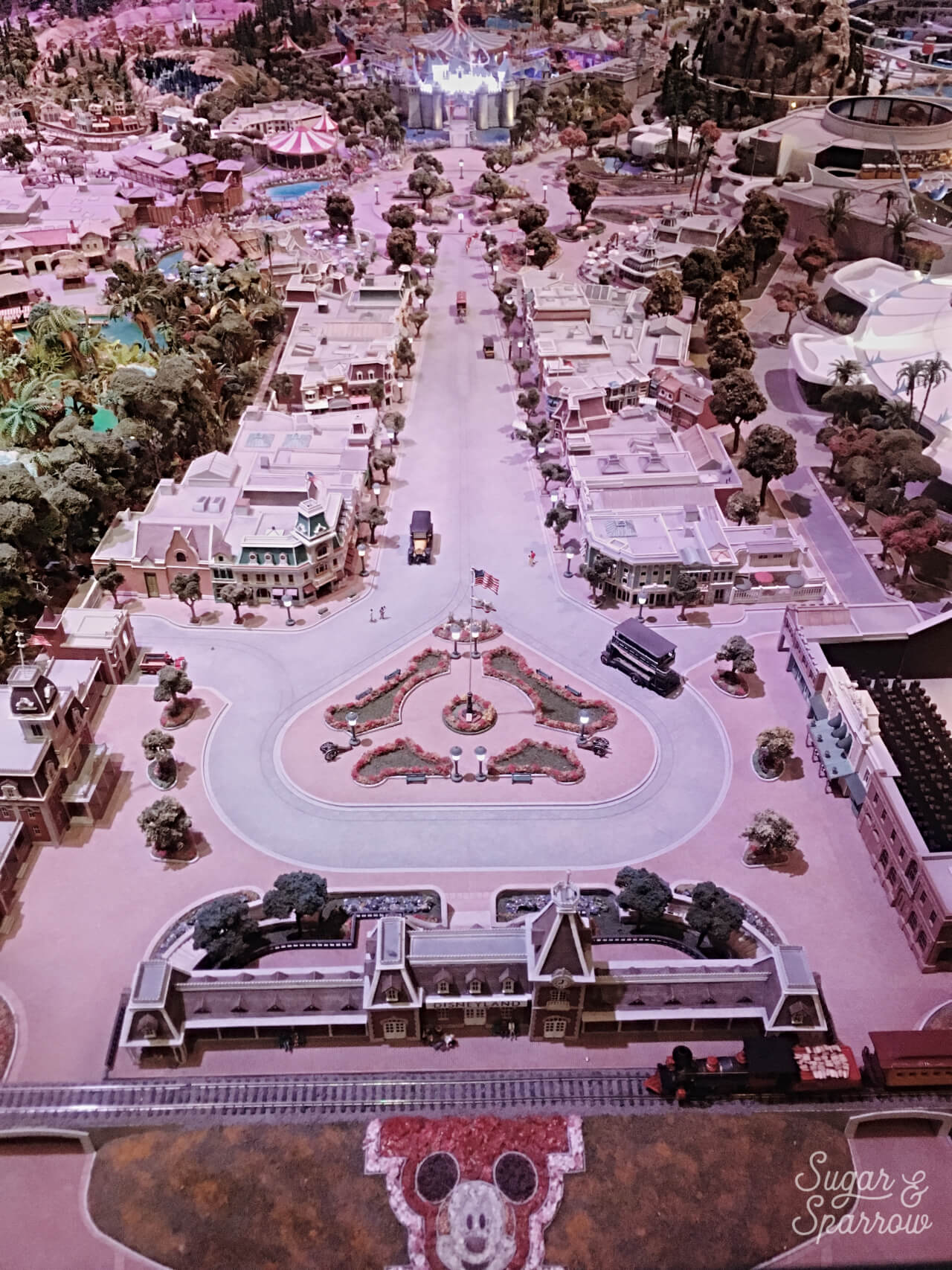 After the Walt Disney Family Museum, we took a little walk to the Palace of Fine Arts in the Marina District. It’s a monumental structure and event space that was originally constructed for the 1915 Panama-Pacific Expedition, and was just really beautiful to walk through, especially on such a sunny morning. 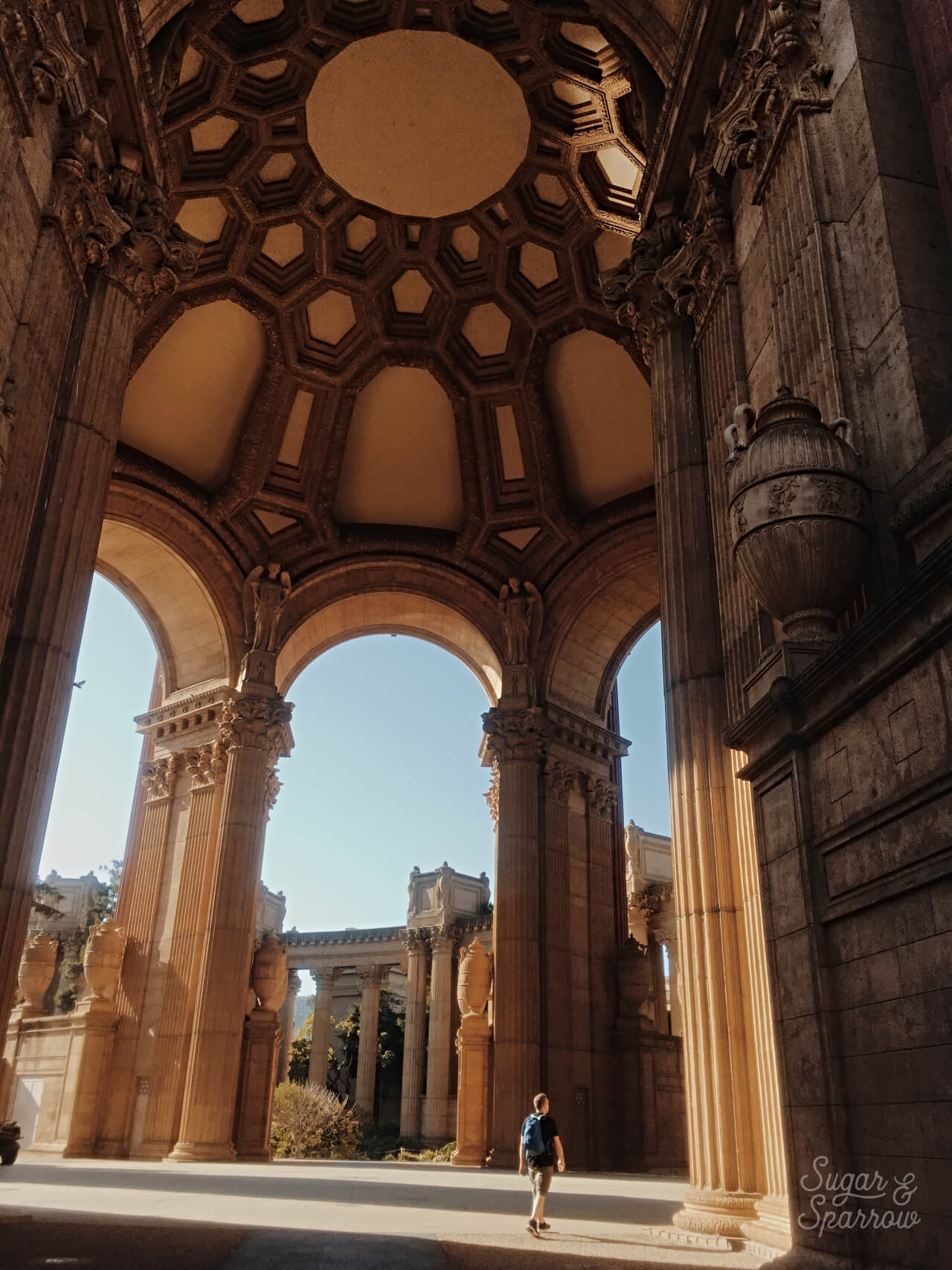 We continued our walk through the Marina District and headed for the Wave Organ, a huge art piece that was created for the ocean to play music. There are pipes throughout the structure, and at high tide, the waves create sound by crashing against the pipes! We didn’t go at high tide, so all we heard were gurgles, but there was a great view regardless. 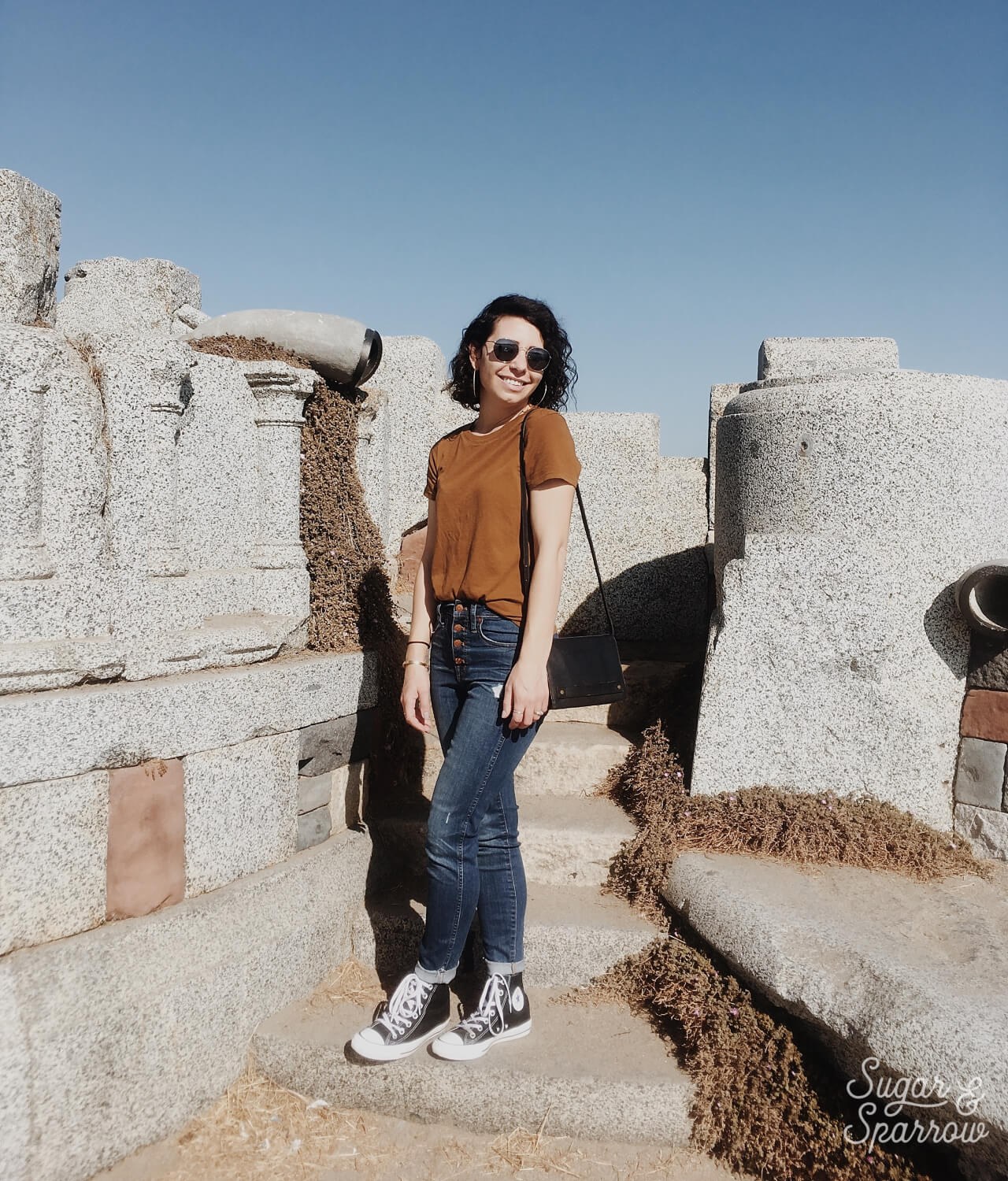 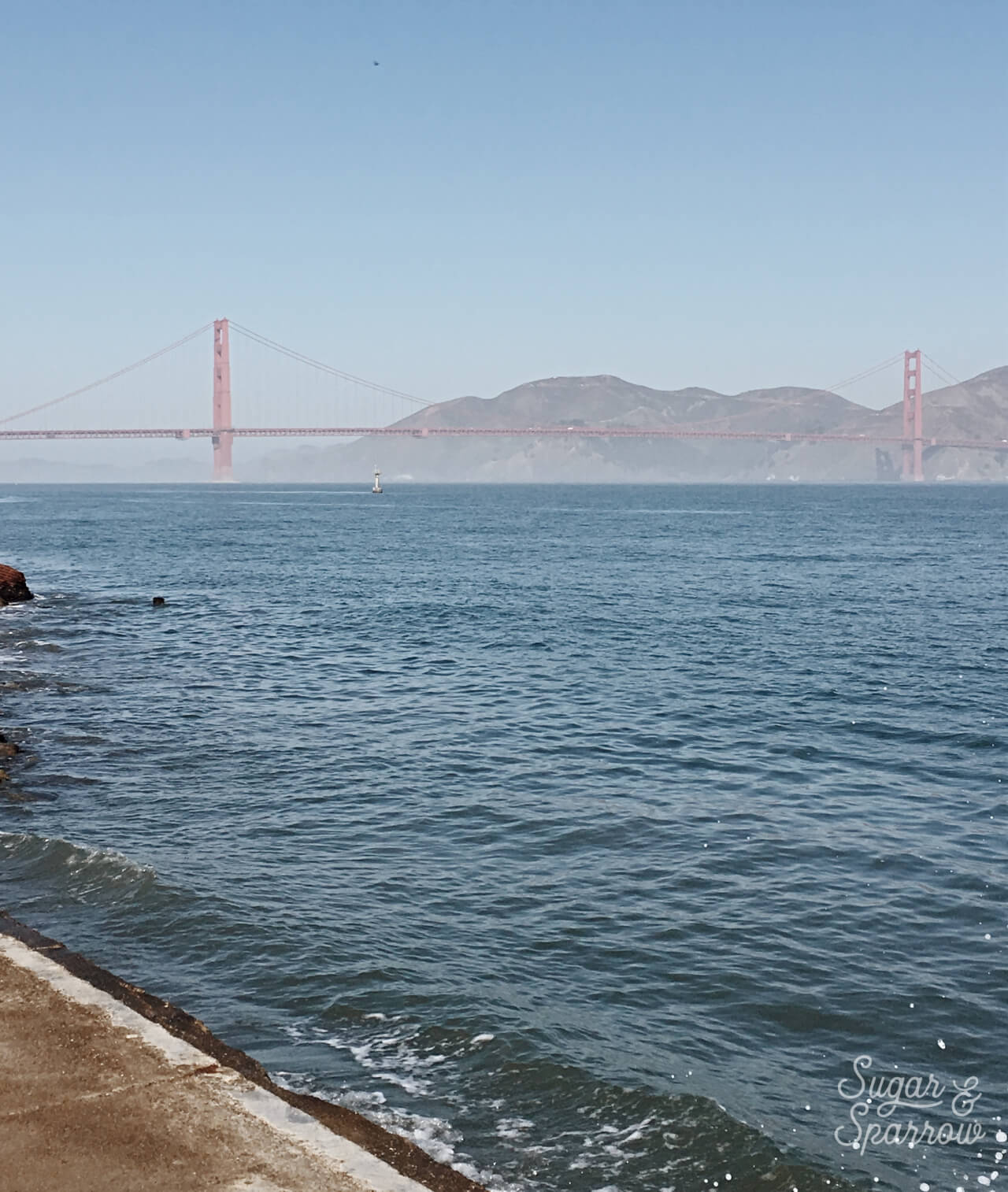 I thought The Wharf would be within walking distance (it is if you want to make a day of it!), and after finding out how far it actually was we decided to take the Muni, San Francisco’s bus system. The MuniMobile app offers a $5 day pass that gives you unlimited rides on San Francisco public transit, which was well worth it for the day ahead. 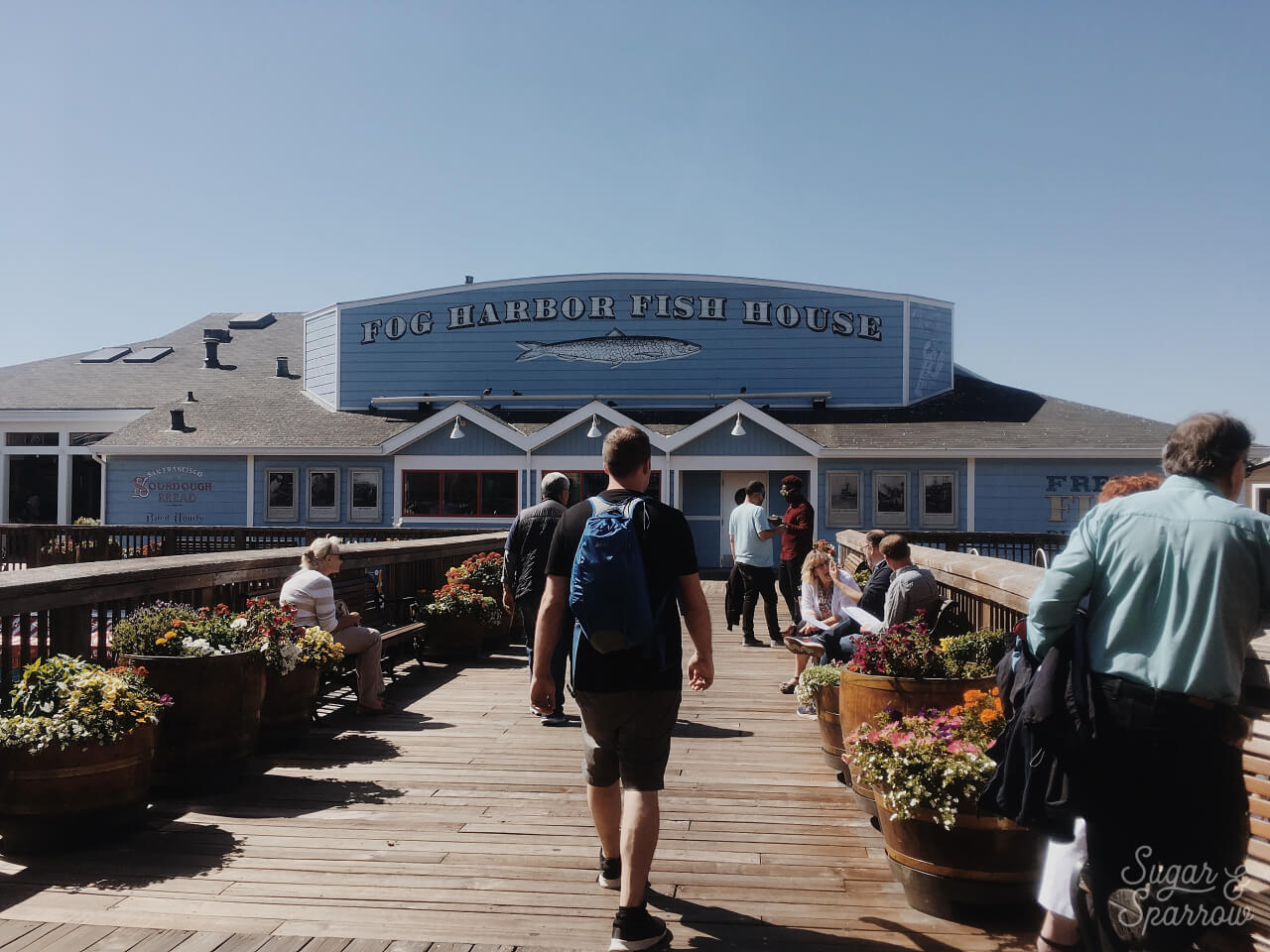 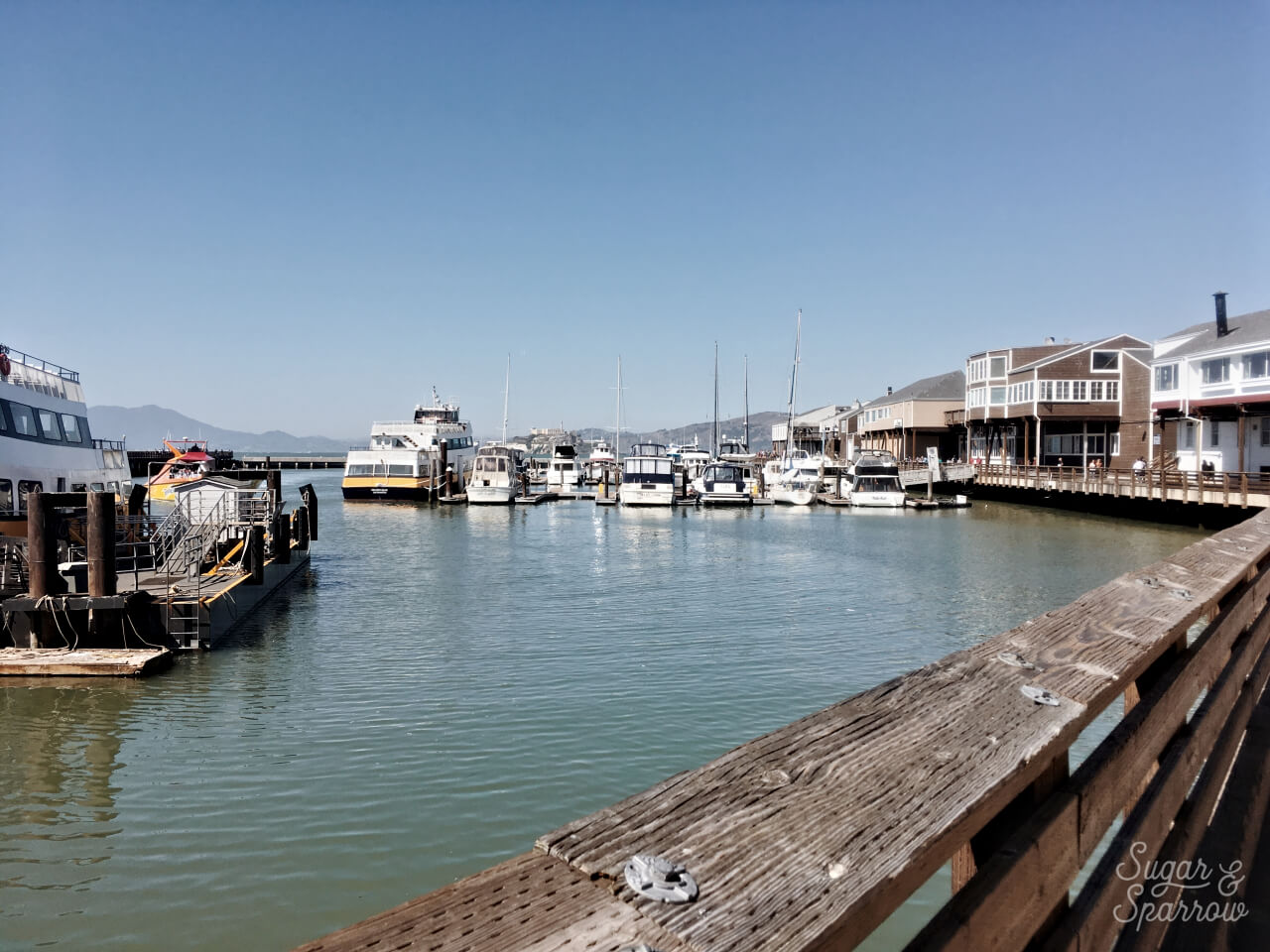 We made it to The Wharf just fine and it was bustling with people. All I wanted for lunch was clam chowder in a bread bowl, so we headed out in search of the perfect place and ended up at Fog Harbor Fish House, which was tasty. Our table had a great view of the harbor and we watched seals and sea lions flip around on the docks all afternoon.

Next, we got really touristy and went to see the Full House house. It was under construction with signs posted from neighbors urging tourists to keep the crowds down, so it didn’t look as photogenic as it does on tv. 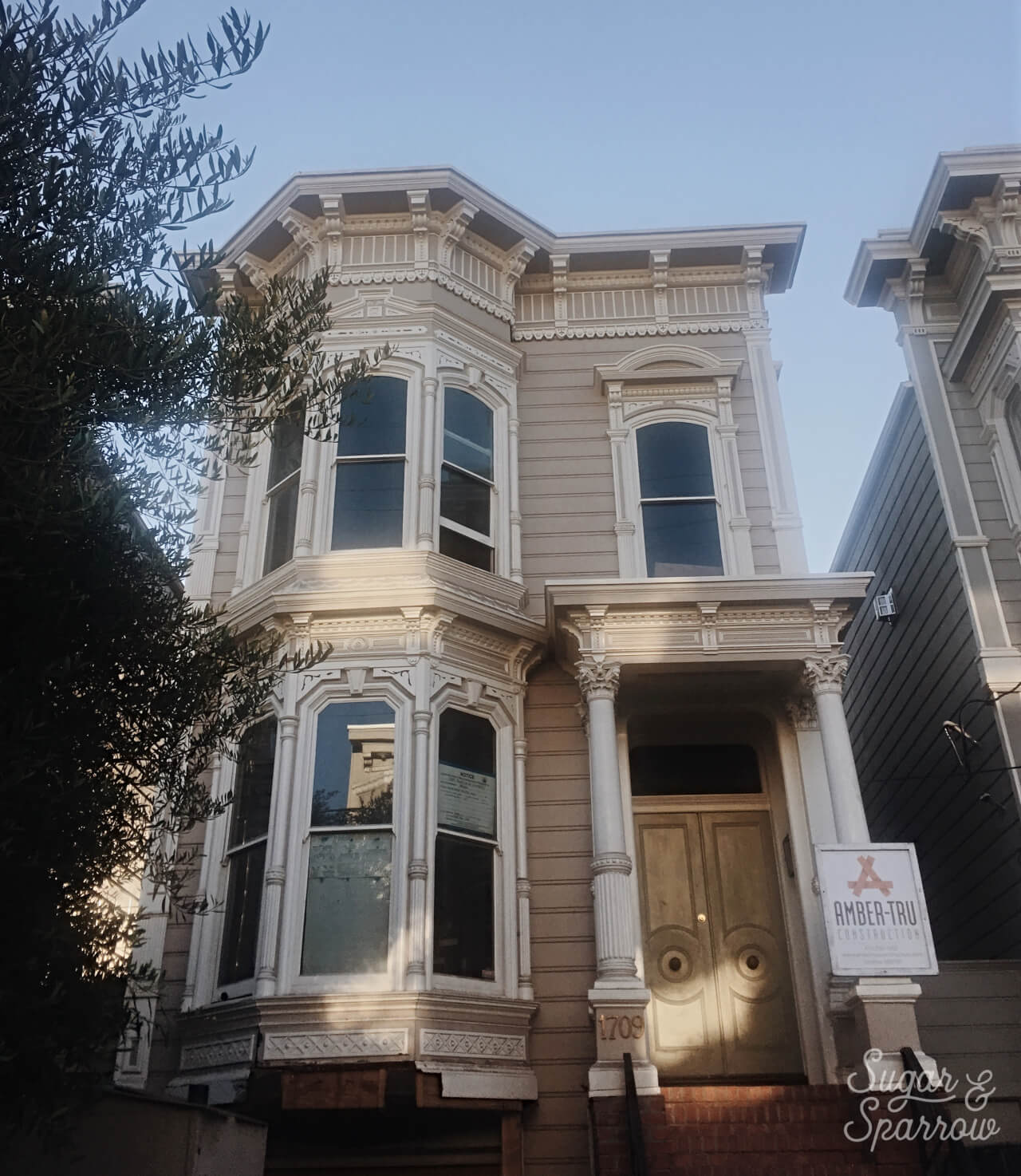 I was more excited about seeing the house from Mrs. Doubtfire, one of my favorite movies of all time. I couldn’t help but imagine Sally Field on the steps, furiously saying, “you ate my begonias!” to the goat from the party. 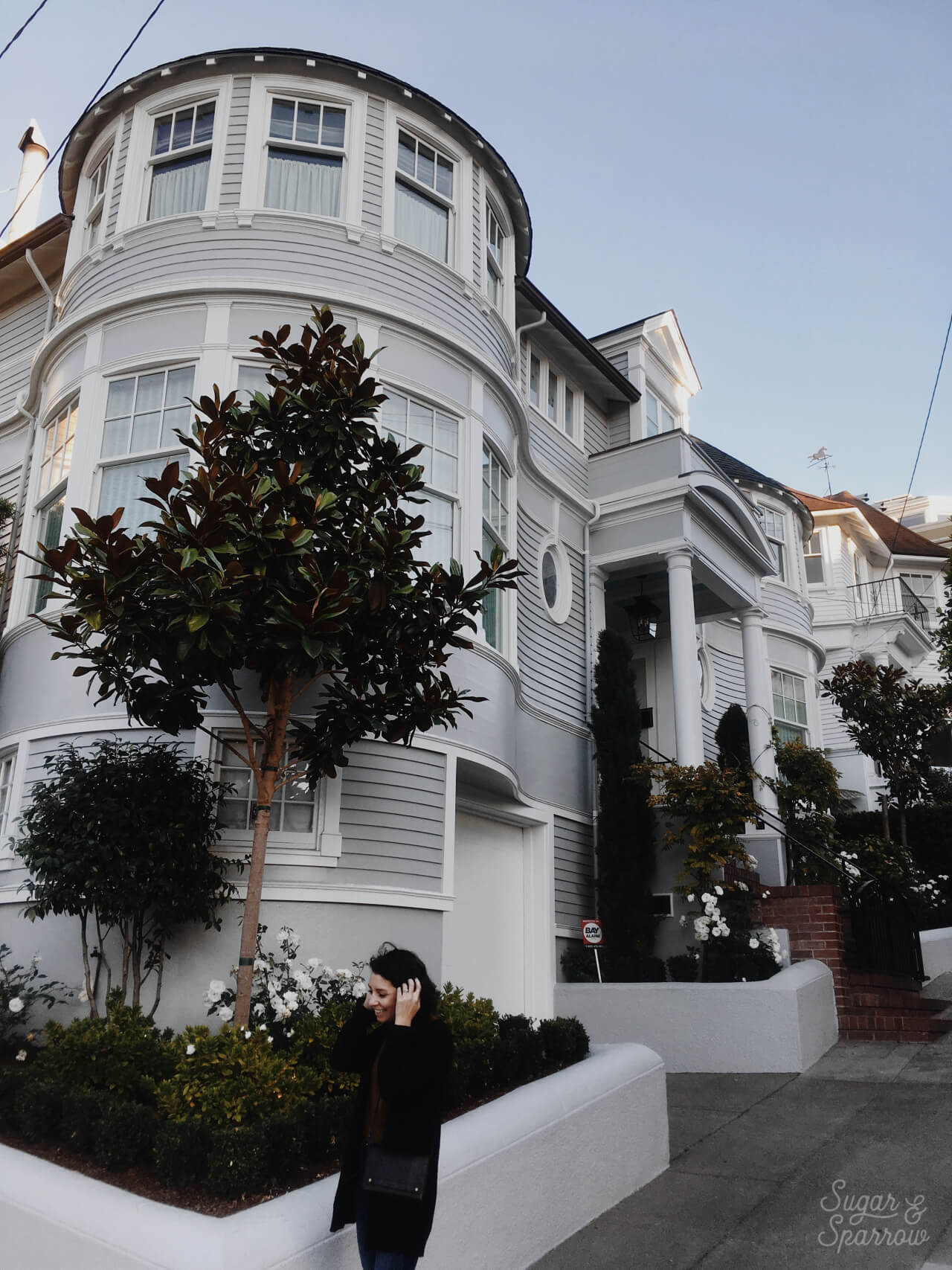 After the famous houses, we ended up taking the Muni to Golden Gate Park and once again, I immediately realized how big the place was. In my mind, I thought we’d be able to reach the end of the park and watch the surfers at Ocean Beach, but in reality, we only made it a little of the way in. I was so exhausted from walking that I didn’t take any pictures and we instead took a Lyft to dinner at Brenda’s French Soul Food. So. Good.

The Ferry From Sausalito

Day two was my favorite day, because it all started out on the ferry! We boarded in Sausalito since our Airbnb was on that same side of the Golden Gate Bridge. 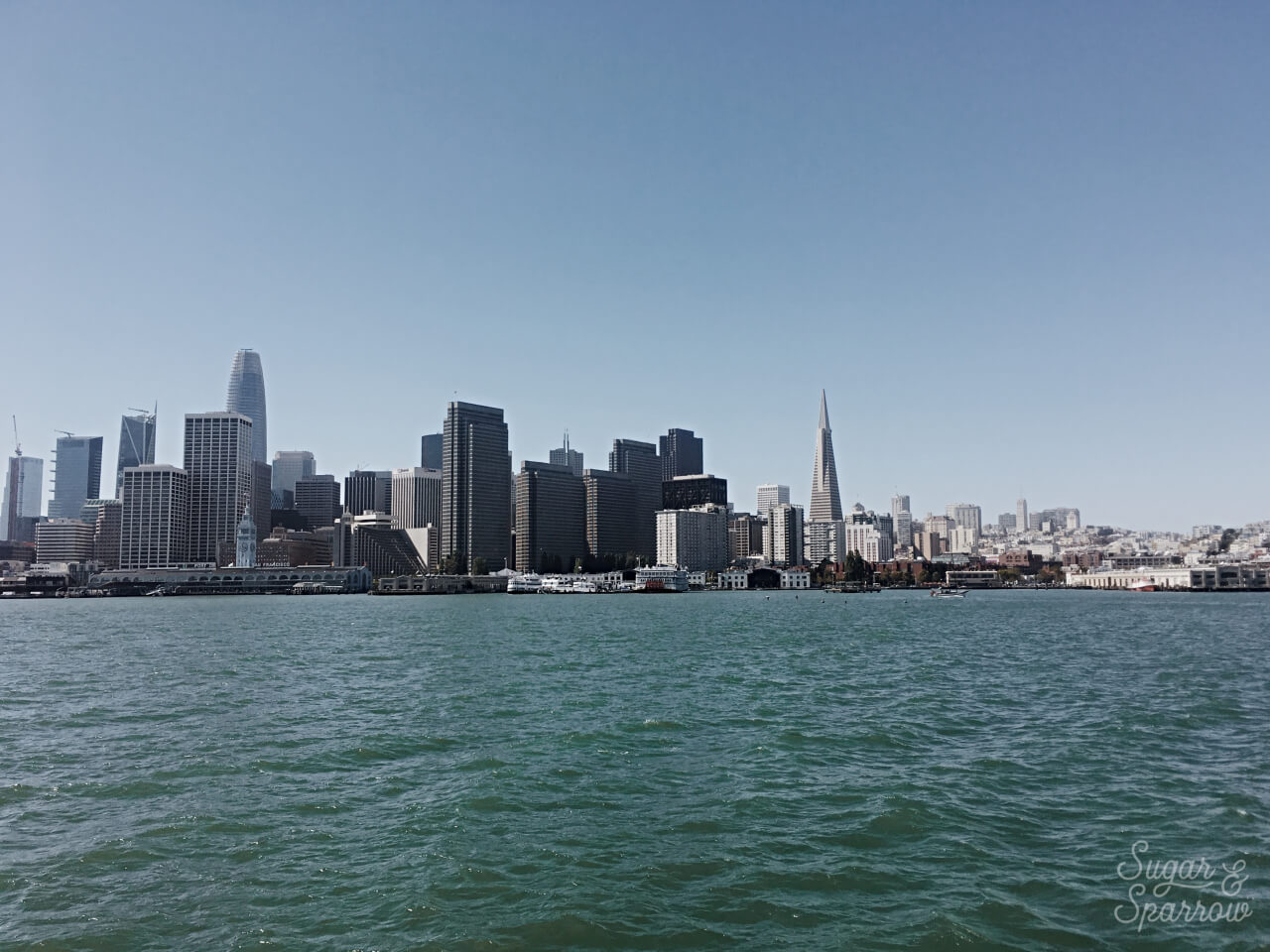 It was a quick 30-minute ride to the city, and we got to pass right by Alcatraz (I am so fascinated by that place!) and see the cityscape from the water. It was beautiful.

After the ferry we headed straight to Tartine. We took some pastries to go and headed a few blocks away to picturesque Dolores Park. It’s the best park I’ve ever been to, with epic views of San Francisco everywhere you turn. We sat for awhile and enjoyed Tartine, coffee, and sunshine. 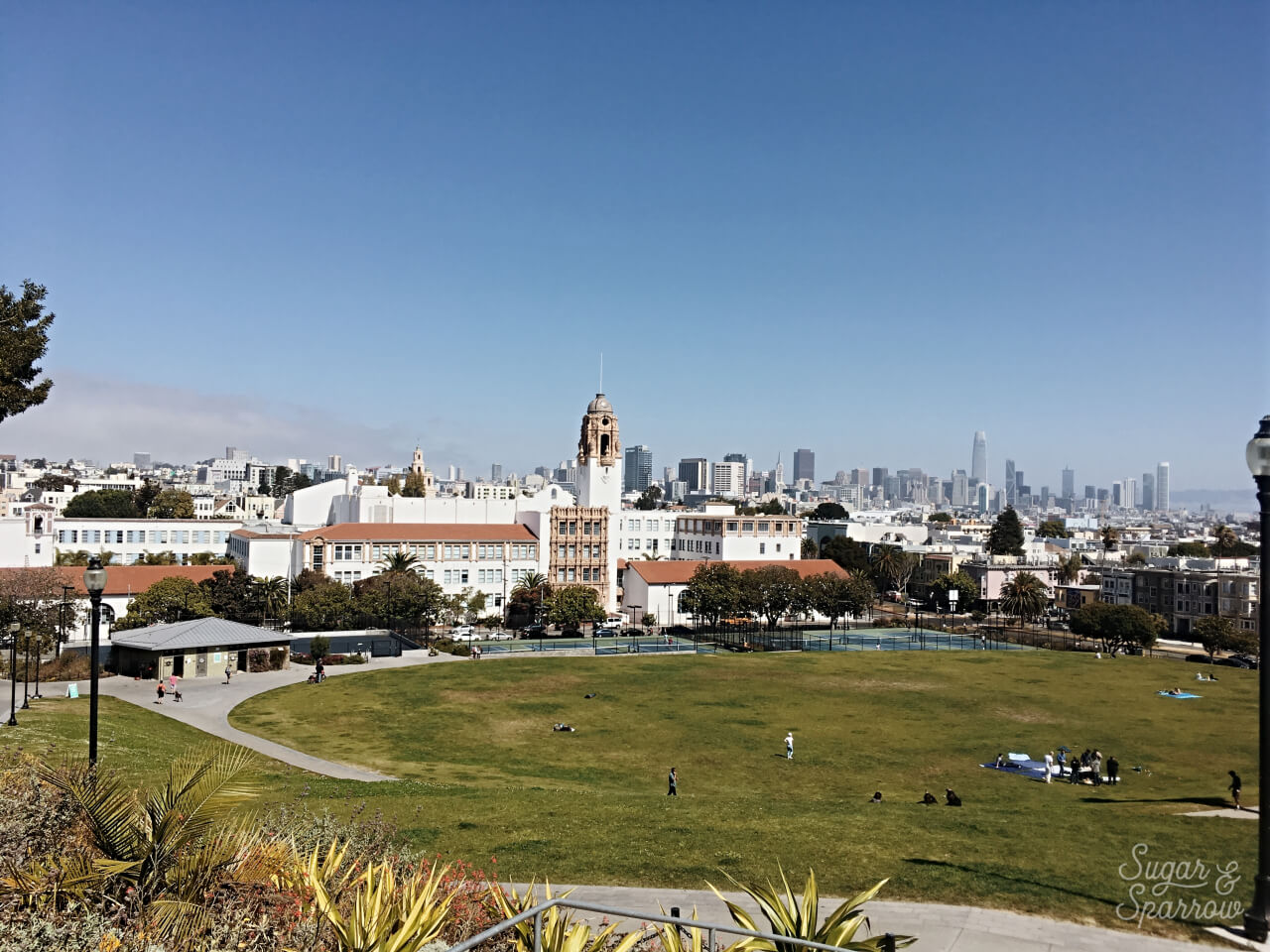 We heard that Valencia street between 14th and 24th had the best shops, so we ventured out and walked the blocks, stopping into stores and seeing all that we could see. It was here that I stumbled upon Dandelion Chocolate and Stonemill Matcha, two of my favorite places for unique sweets in San Francisco. And for lunch, Gracias Madre.

I couldn’t help but take pictures of the foliage and all the pretty houses with bay windows peppering the Mission District. 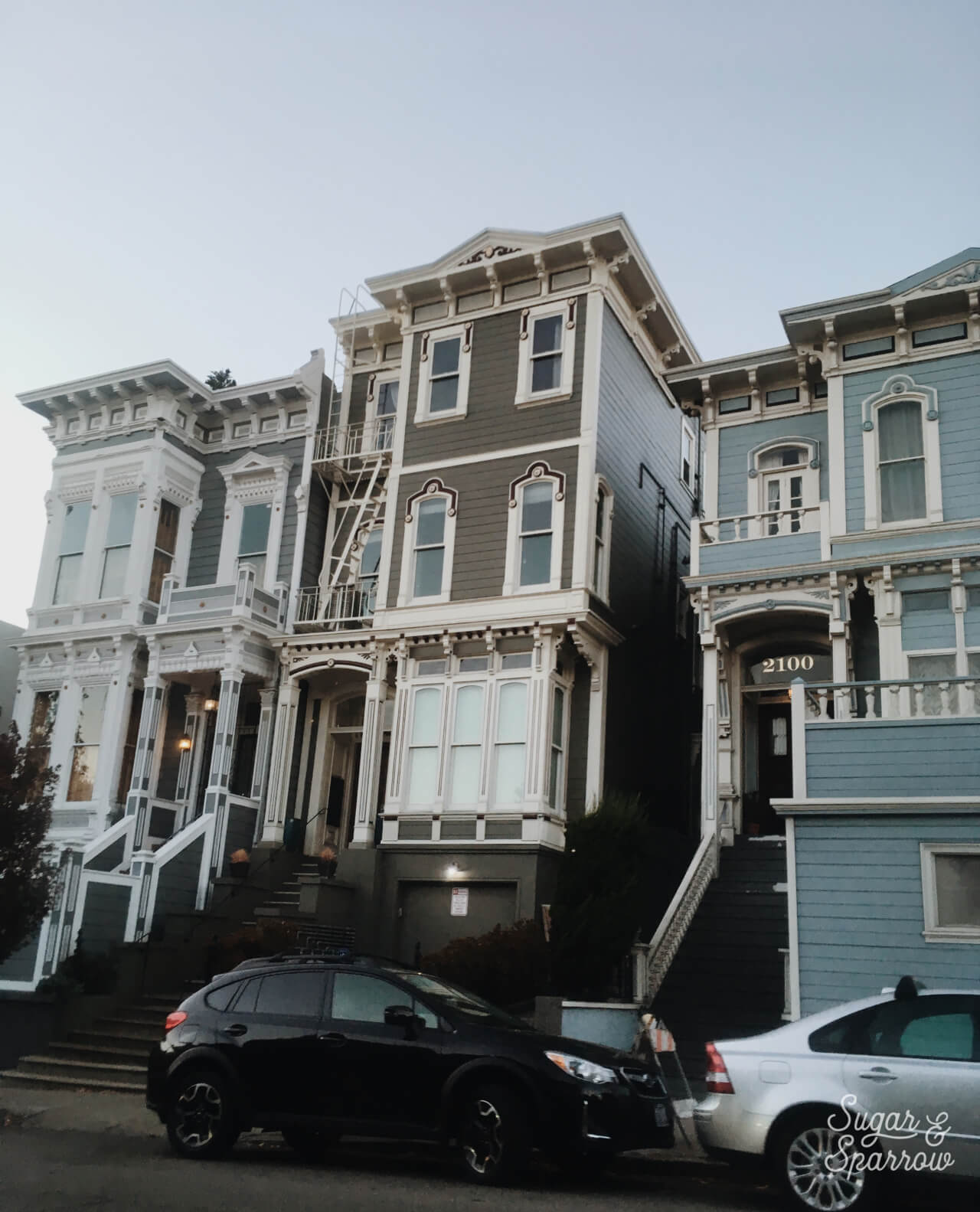 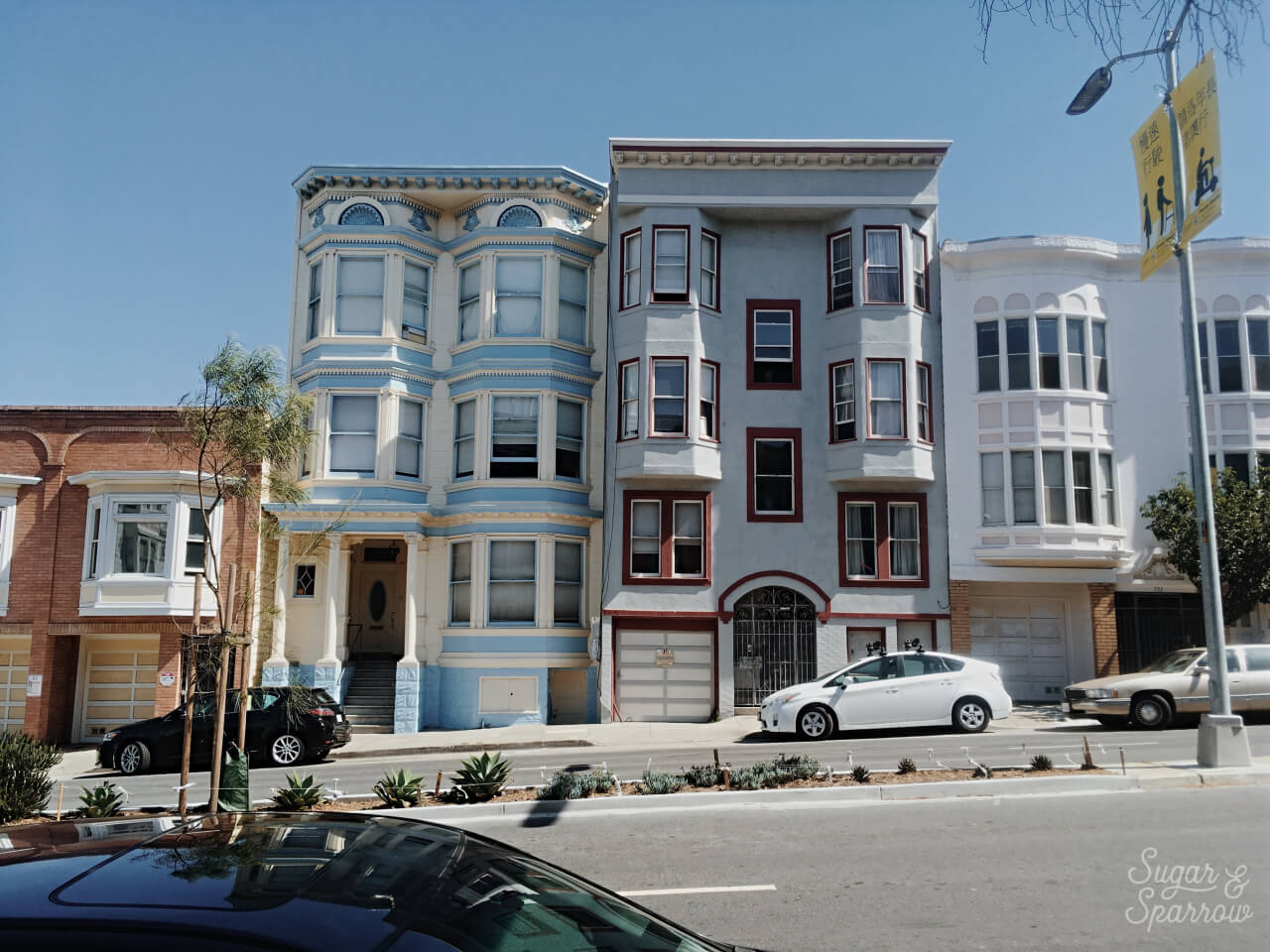 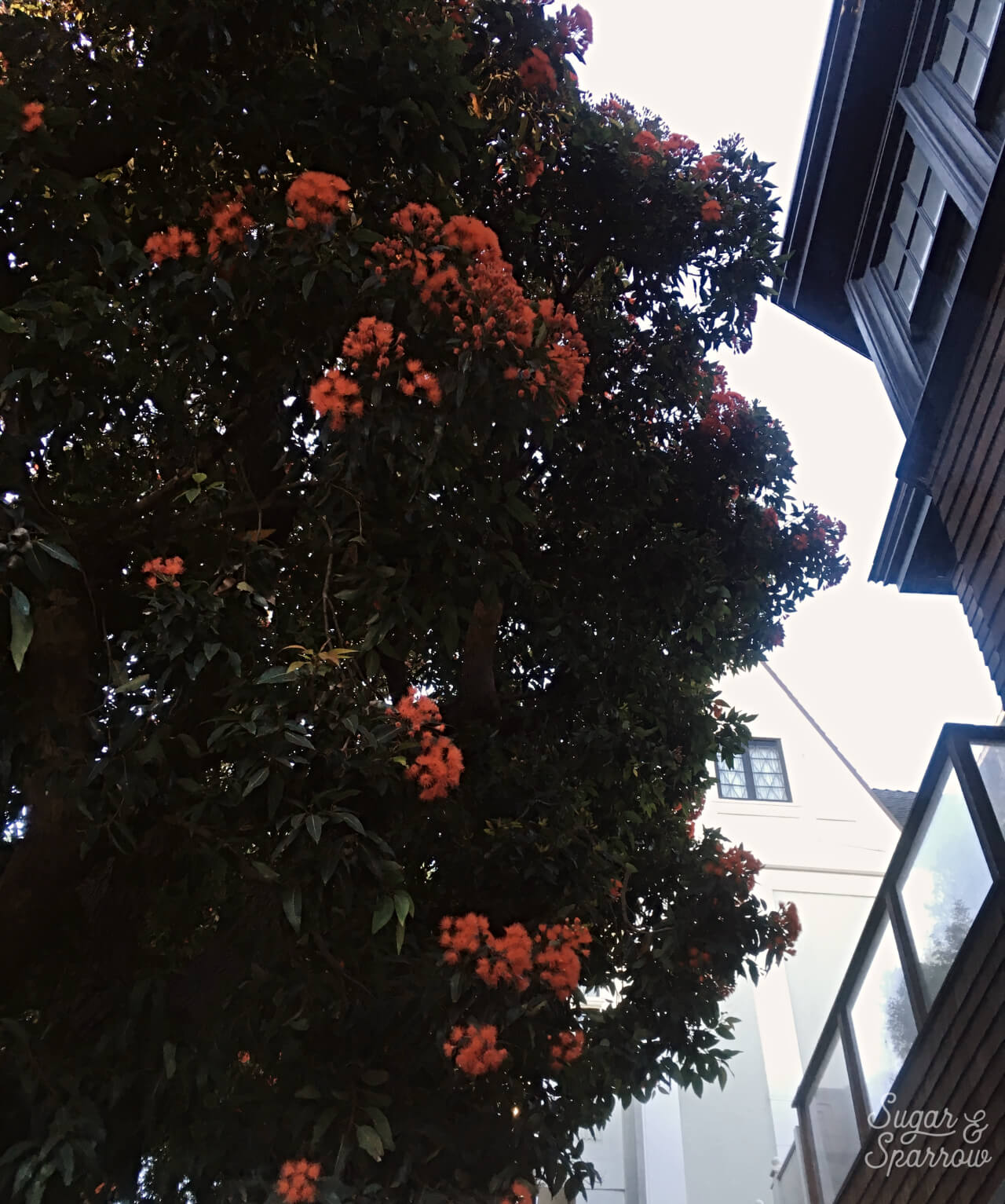 We ended day two by meeting up with some friends who had moved to the area a few months prior. They took us to an amazing sing-along viewing of Yellow Submarine at the Castro Theater. When we got there, we were each handed a goodie bag with a shiny gold crown, bubbles, confetti poppers, and glowsticks! It was so much fun!

Since we only had two days in the city, there was plenty that we didn’t get to do. We had so much fun in San Francisco that we will definitely be back, and I’ve already made a list of things to put on our itinerary:

The Museum of Ice Cream – not so much about the history of ice cream per se, but rather, this place is an art exhibit with a colorful maze of rooms themed around ice cream and candy. It’s basically a giant photo-op, but looks like so much fun. There’s even a pool of rainbow sprinkles!

Alcatraz – Surprisingly, I didn’t know much about Alcatraz before coming to San Francisco. After seeing it up close on the ferry ride and hearing stories about the famous escape, I am so curious about what went on there and definitely want to book a tour next time.

Little Italy – Mainly because I’m Italian by marriage and this place seems romantic. I also hear that there’s a great place to get cannolis called Stella’s.

B Patisserie and Mr. Holmes Bakehouse – These are the two bakeries that were on my list that we didn’t get to see, mainly because they closed earlier than I thought and I didn’t plan accordingly. Mr. Holmes Bakehouse is the place with the famous “I got baked in San Francisco” neon sign.

Golden Gate Overlook – one of my biggest fails was not planning a time to take a photo with a more epic view of the Golden Gate Bridge! This is a spot in Presidio with a beautiful view.

Are there any things you’d recommend doing on a trip to San Francisco? Let me know in the comments for the next time we’re there!