These past few months have been crazy. Between the demands of the holiday season coming up and working on a never-ending list of house projects, I am feeling perpetually frazzled these days. Despite the chaos, I thought a little recipe creating sesh would be perfect for me because baking does something good to my soul. I was right. I put on some Springsteen and decided to try my hand at creating the perfect pumpkin layer cake. Five rounds of bakes and a handful of albums later, I am so thrilled with how this Pumpkin Layer Cake turned out.

The pumpkin flavor of this cake comes from canned, pureed pumpkin and a medley of beautiful spices: cinnamon, allspice, nutmeg, and ground ginger. It’s so classic to pair this pumpkin layer cake with cream cheese buttercream, and in my opinion the flavor combo never gets old. I bet it would taste amazing with my spiced chai vanilla buttercream too if you want to get really autumnal (imagine a pumpkin spiced chai latte but in cake form!).

The cream cheese buttercream recipe you’ll find below is sturdy and pipe-able without being overly sweet, which is why it’s my forever go-to. I colored some of it with Americolor Orange and Wedgewood and used Wilton Tips 8B and 4B to pipe those cute little pumpkins on top. Probably the easiest way to create buttercream pumpkins, ever. I piped them into a crescent moon shape because it gives me all the feels, but you do you.

I decided to repurpose some of the pumpkin cake scraps into toasted cake crumbs that I pressed onto the sides of the cake and sprinkled around the piped pumpkins on top. It adds a great texture and I always feel good about finding a way to use leftover cake! I just crumbled the cake scraps into a pan and toasted them on the stovetop for about 10 minutes, stirring them frequently until they began to crisp. You can toast cake crumbs in the oven as well, but it takes almost an hour at a low temp, and I was impatient (hence the stovetop). Just be sure to let them cool completely before you use them on your cake and you’re good to go! 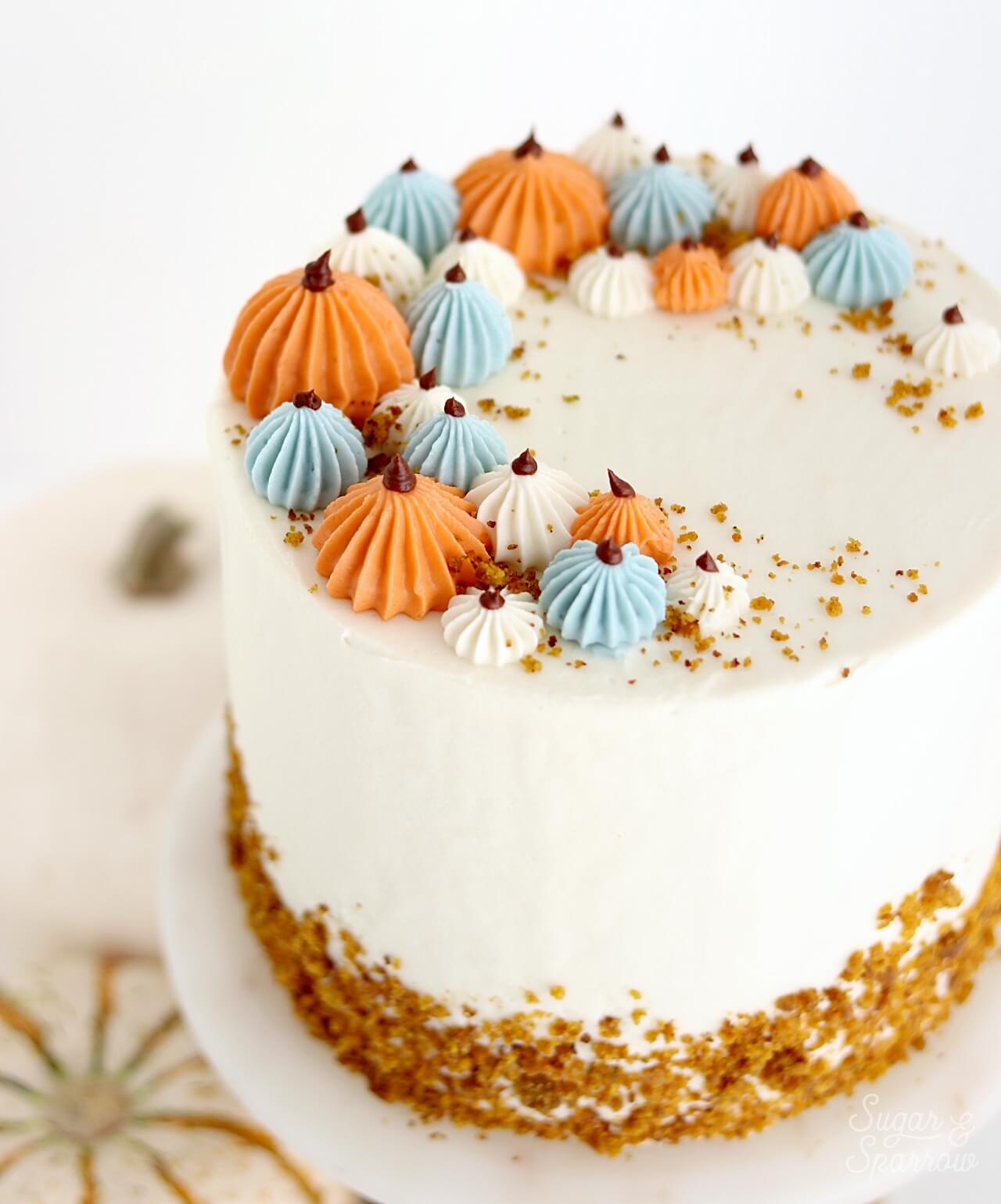 *DIY Buttermilk Recipe: Add 1 Tbsp white vinegar into a mason jar or measuring cup. Add one cup (240ml) whole milk and let sit for at least 15 minutes before using in a recipe.

**Toasted Cake Crumbs Recipe:  crumble cake scraps into a frying pan and toast on the stovetop on medium for about 10 minutes, until the cake crumbs begin to crisp. Let them cool completely before using them in your cake decorating.

This pumpkin layer cake recipe is a true crowd pleaser, perfect for any Fall gathering! I hope you love it as much as I do. Let me know what you think in the comments below and feel free to tag @sugarandsparrowco on Instagram if you post a pic! I love to see what you create.